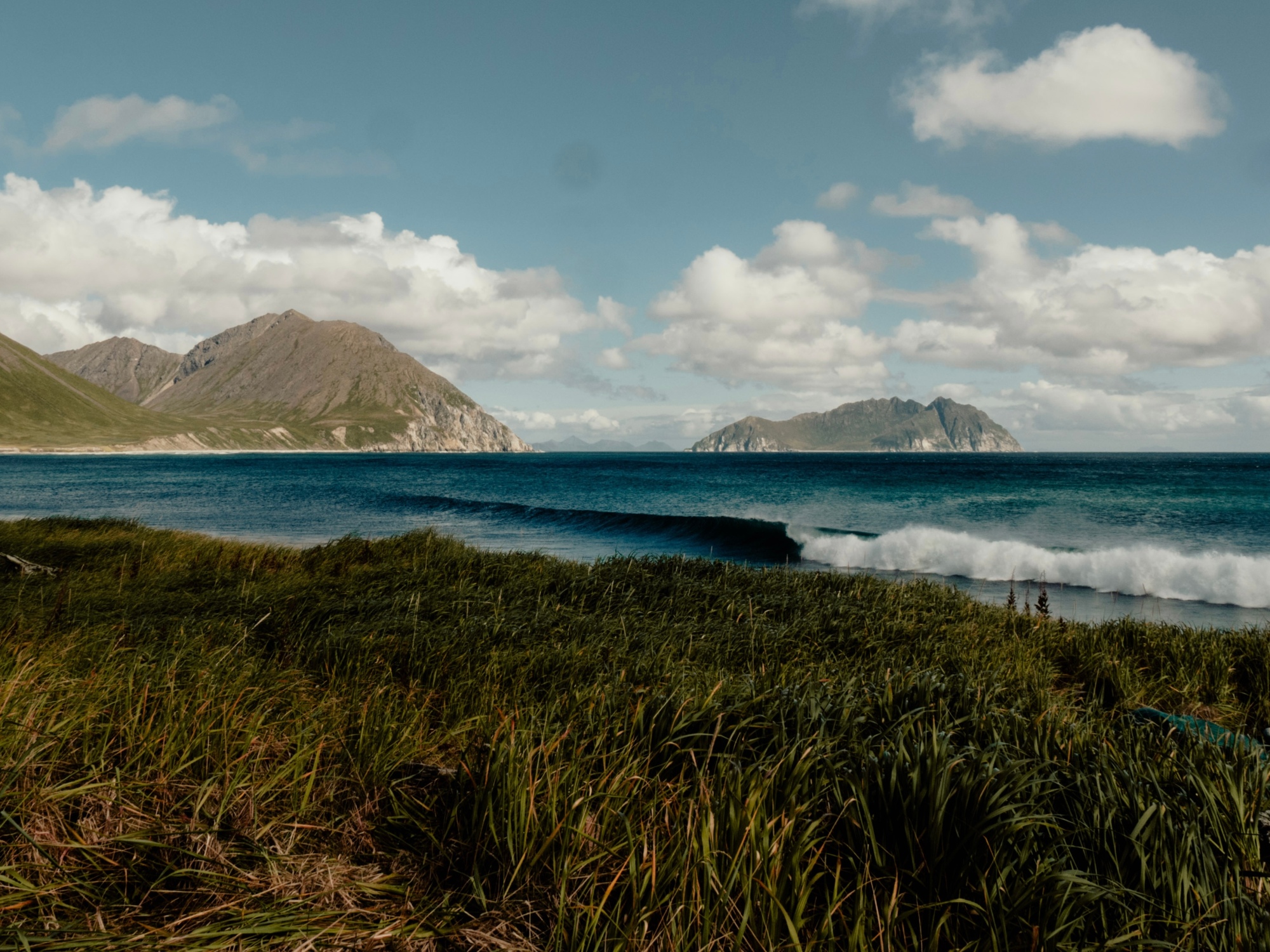 A short film, a few words, and some images about our recent surf trip to an uninhabited island in western Alaska.

Every now and then, a surf trip delivers in a major way: new waves found, perfect waves surfed, amazing companions & unusual landscape. Our recent trip to the Aleutian Islands was inspired by one such mission, 7 years ago, where we had found memorable waves during a trip to the Shumagin island (located at the start of the Aleutian chain in Alaska).

Fast forward 4 years, and in an effort to revisit some of these waves, Casey (aka Big Dog, who was on the original trip), Laura (aka Ma Cherie, since she is my adventurous partner and we speak mostly Frenglish) and I, came up with the plan to get dropped off on one of the islands that is the home of some of these memorable waves.

Skip a few covid years and it was finally happening. September 2022 we flew to Popof island, our place of embarkment, for final preparation. With much advice from Captain Mike McCune, Jack and Drew (two local fisherman) we decided on a drop-off point that would have guaranteed waves and access to fresh water.

So off we went, aboard the boat of a local fisherman, Charlie. After 7 hours at sea, with seriously unusually perfect conditions, we were at the front of our palm tree-free paradise island, paddling our inflatable toy boats back and forth, between Charlie’s fishing boat and the shore, to bring our 3- 400kg of gear to land. Laura & I were wearing our 6’5’4mm wetsuits, Casey was wearing shorts… we should have called him Wim Hof from then on. Paradoxically, he was wearing booties doing this, but was pretty much bare foot for the rest of the trip when the weather turned back to…crap!

What we then experienced was a complete re-set, where your mind never gets clouded & crowded by anything that isn’t either fun or food-related! The fun was non-stop: finding a well-shaped right-hander a shy 50m from our camp, hiking to other waves along seal-infested waters, hiking ridges where you wondered if any human had been before, climbing up mountains that looked like Teahupoo’s back drop, cooking moose meat generously shared with us by Popof Island locals, building walls and other improvements to make our tents wind & rain-proof, whale & eagle watching, and even the occasional fishing missions when we were tired of singing or playing B-ball ( yep, sadly even Alaska gets it fair share of plastic pollution and we found a mostly-inflated basketball amongst other rubbish along the shore).

9 days into our island life, we were contemplating staying there permanently when we got a message on the satellite messenger from Mike: Bad weather coming. We will extract you tomorrow morning. Panic took over: how are we going to finish our rationed reserves of booze and M&Ms in such a short time. It turned out we panicked for nothing, and it was in fact easy to finish it all with a bit of dedication. The following morning, we got a second message: the skiff is out of order, you will need to paddle to the boat. The skiff being the small boat hanging off the back of Mike’s rather large fishing vessel. Mike had to anchor in deeper water and couldn’t come and get us. The next 2 hours looked like the A-team in a raft building frenzy, with not much at their disposal, and not a huge amount of faith in their abilities, but failure was no option. Laura & Casey built a raft with driftwood & buoys to float our 3 large board bags, and I made a less exotic-looking raft out of our two kid’s blow-up boats and paddle board. Loading them was delicate as the shore break didn’t cooperate and was breaking on large slippery boulders. Once loaded, Laura took off like a seal chased by an Orca, with the bigger raft hanging off her leg rope and made it to the boat with some smart paddling against the “cross-current” to eventually land dead straight in front of the boat. It was quite a sight! Casey & I followed with the rest of the gear and were welcomed aboard by Mike and a bunch of ultra-friendly pro surfers, photographers and videographers who like us thought they were the only surfers within 5000km.

After a long and rough traverse back to Popof island, Mike and our new friends dropped us off, and the next phase of our adventure started. It involved meeting just about everybody on the island, explaining why it is a good idea to camp out and surf in 7-degree (celsius) water, and celebrating it. We also realised that our extraction from the island was to avoid 50ft seas generated by Typhoon Merbok which destroyed 1500 miles of coastlines in the Bering Sea. Not all details of our Alaskan immersion can be shared succinctly, but in a nutshell, they involve stewed sea lion & mushrooms, roof renovations, fish throwing competitions & taking in hours of story-telling about their life at sea, which made our recent little adventure sound more like a standard camping weekend.

To finish off beautifully, Drew one of the only local surfers took us surfing to a nearby island in his skiff.  We surfed a wave we had found on that original mission 7 years ago. We had called it Dingos, as a few of us Aussies had dinged our boards while surfing it. Casey calls it the world’s most spectacular surf spot: it is at the bottom of a cliff, with a double waterfall, a pinnacle to one side, and a few wild cows looking down on us. We have to agree Casey. Dingos didn’t really deliver on that day, but Drew’s cheerfulness and excitement when taking off on the close-outs made up for it. Thank you, Alaska.

One thought on “Aleutian Extracts – Alaska”